Technical consulting for the global automotive and sealing industries 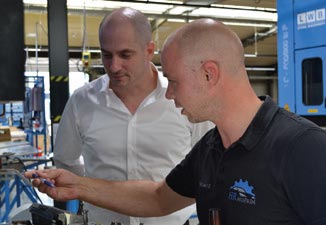 HR-MoPrIn was founded by Ralf Huber and Thomas Röder in Losheim am See, a village close to the French border in the South West of Germany. Both started their careers in the automotive and sealing industry at an early stage. After his training as a car mechanic at Daimler-Benz, Ralf Huber moved into sealing  Solutions for the automotive industry. He gained a wide range of experience in the fields of EPDM and TPE mould technology, punching technology and process optimisation at companies such as Hutchinson Ela-Tech and SaarGummi Group. Thomas Röder did an apprenticeship as a tool mechanic specialising in mould technology at SaarGummi. He worked in the fields of EPDM/TPE mould development (automotive seals), punching technology, global supplier management, project support, prototype development, global equipment procurement, TPE and EPDM presses, and standardisation. Roeder holds a bachelor’s degree in mechanical engineering. After working several years for SaarGummi, Huber and Roeder finally dared to take he bold step toward self employment and founded HR-MoPrIn GmbH in 2016.

HR-MoPrIn supports the global auto- motive and sealing industry in the field of sealing systems and moulded articles through technical consulting. Two recent examples for its extensive global activities are: The company is currently supporting the start of series production for VW and Daimler in Mexico and is involved in over- all process optimisation projects for Tesla in the USA.

The company offers a wide range of ser- vices:

Optimal planning based on long-time experience

Huber and Roeder emphasise that the de- cisive factor for a successful production of EDPM parts or hybrid parts with EPDM is an efficiently working precise mould. The devel- opment of the mould is one of the most im- portant aspects within the project schedule. A thorough and intelligent mould develop- ment is the basis for dimensionally accurate parts, an efficient and operator-friendly pro- duction, and a long service life. Each product is a challenge with very specific demands for the project supervisors. Over the years HR- MoPrIn has developed special expertise in meetings these various demands.

Product cycles in the automotive and oth- er industries are getting shorter and short- er. This also means tightening deadlines and time slots for the production of injection moulds. Delays can be avoided with a pro- active schedule and resource planning. But nobody can plan the unpredictable. How- ever, a good planning, a measurable target/ actual comparison and technology specific progress recording can prevent many possi- ble complications. 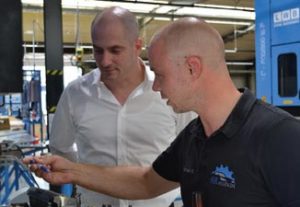 Mould sampling goes far beyond the mere production of good/proper parts. An addi- tional aspect of sampling involves the elimi- nation of “teething troubles” during initial production of a small series production.It is essential to revise certain settings and processes after an initial production phase (try-out phase) and to optimise them if nec- essary. Especially in this try-out phase, the elimination of many small mistakes results in a significant improvement of the future

production at the production site. HR-Mo- PrIn takes over the sampling and the pro- duction of the initial quantities at the re- spective mould supplier in cooperation with the customer.

After initial sampling, a new series injec- tion moulding tool (TPE/EPDM) is integrated into the series process. In this phase it is cru- cial that the overall framework conditions in the future series process are consistent. Well run-in injection moulds, the harmoni- sation between the machine and the mould and the constant education and training of the employees are essential for a successful production.

Today, TPE corner joints have become in- dispensable in static and dynamic automo- tive sealings. For more than ten years already EPDM is replaced by TPE in corner moulding due to processing advantages such as the possibility to recycle the sprue, shorter cycle times, cold injection moulds, etc. 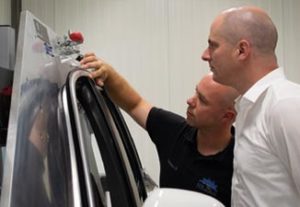 The development of the mould is one of the most important aspects within the project schedule.

The switch to TPE also brings about a re- thinking in the construction and design of these parts. This process is ongoing. Up to now, the constructions of the TPE corner joints are mainly adopted from the previous EPDM constructions, and are only slightly re- vised. But the design of these parts is becom- ing more and more complex in terms of trim- ming, insertion of multiple glazing lips and narrower connections between the individ- ual glazing lips. However, the TPE construc- tion designs are still very close to the EPDM designs. This means that still too little atten- tion is paid to maintaining thin wall thick- nesses between approximately 1 – 3 mm, the position of a sprue point or variations in wall thickness.

In the area of the B-pillar in particular, thickenings were often introduced in the EPDM in order to fill gaps in the sheet met- al. When working with TPE this practice is extremely unfavourable, since these thick- enings or wall thickness variations lead to problems when injecting into an open mould such as sink marks, binding and filling prob- lems, air inclusions or formation of streaks. These problems are very difficult to rectify later in series production and lead to in- creased scrap. Therefore rethinking is neces- sary in the construction of the complete area including metal and panel design. What once applied to EPDM is not universally applicable to TPE today. With its many years of experi- ence HR-MoPrIn is able to support customers directly in production, project management and construction – perfectly adapted to the specific material.

This article was published in TPE Magazine International 3/18: https://www.gupta-verlag.de/zeitschriften/tpe-magazine-international/03-2018